We’ve all heard different rumors about sushi; when to eat it, how to eat it, which kind is the best. But which ones are real? Here some of the five most-discussed myths of sushi debunked so you 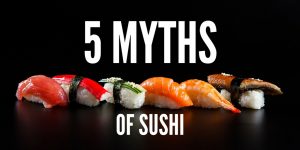 can enjoy your favorite meal without a doubt in your mind.

1.Sushi originates from Japan.
False. Sushi is thought to originate from somewhere around Southeast Asia, what is current-day Northern Thailand. Wrapping raw fish in rice was originally used as a method for preserving the fish during transportation.

2.You should always eat sushi with sake.
False. Actually, it was frowned upon to dink sake when eating sushi back in the day. That’s because both are rice-based items, and there isn’t enough contrast of flavors. If drinking sake, most people switched to drinking beer or green tea when they ate sushi.

3.You shouldn’t have sushi on a Sunday or Monday.
False. Most sushi-lovers assume that Sundays and Mondays are the worst time to enjoy their favorite meal because the fish are less fresh, or even old. The truth is, good sushi chefs know exactly when each fish has reached its peak flavor, which could be anywhere from two days to a week.


4.Always use soy sauce.
False. Sushi is an art, and part of that art is balancing all the flavors just right. Most soy sauces are actually much too strong to pair with the delicate flavors of the fish. If you’ve got an artful chef, they will normally dilute the soy sauce with their own secret recipe to make sure all the flavors work together well.

5.Rub your chopsticks together.
False. Most people rub their chopsticks together to make sure they get all the splinters out of it. Originally, you were only to rub them together if you were eating noodles, in order to create a rough edge to pick them up with. However, if you did this in a Japanese restaurant, it would be implying that their utensils are of poor quality, and therefore be insulting.

A Sushi Master
Now that you’ve learned a little more about this artful food, it’s time to test your sushi master knowledge at a traditional Japanese restaurant. At Shogun Japanese Steakhouse in Orlando, our chefs know all the tricks and secrets to making the best sushi. Reserve your table today by calling (407)-352-1607 and learn even more about your favorite rolls.