Octopus vs. Calamari – What’s the Difference?

Octopus and Calamari live in saltwater from the tropics to temperate zones. 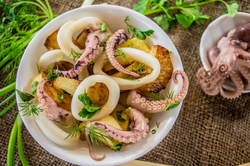 Like clams and oysters, octopus and calamari are mollusks (invertebrate sea creatures), classified as cephalopods, meaning “head-footed.” The ”arms,“ are connected to their heads, while the rest of the body is in front of the head.

Characteristics: Cephalopods are physiologically similar to other mollusks, but the main difference is their lack of a shell. An octopus does not have a shell at all, while calamari has a small internal flexible backbone called a pen. When in danger, both use defense mechanisms, such as swimming away quickly, camouflaging themselves, and shooting ink at their predators.

Habitat: Calamari swims in the open ocean waters, either alone or in schools, and uses its eight sucker-lined arms and two specialized tentacles to catch its prey, which consists of various fish and shrimp. Octopus are solitary creatures that live in dens on the seafloor, which trap their prey of bottom-dwelling crustaceans and mollusks, by using its eight arms lined with suckers.

How Do Octopus and Calamari Differ in Taste and Cooking?

Octopus is commonly confused with calamari, though both are surprisingly different in taste (when served raw) and cooking methods. Many people think calamari dishes are made from octopus, when in fact calamari is actually made from a type of squid. This confusion could be due to similar tastes when the octopus is prepared.

Experience the Taste of Japan

Discover the deliciousness of both by ordering octopus nigiri or sashimi as an appetizer, and then calamari as an entrée served with teppanyaki vegetables, fried rice, soup, and house salad with ginger dressing. For one of the most unique dining experiences in Orlando, join us at Shōgun Japanese Steakhouse by calling 407-352-1607 to reserve your table.