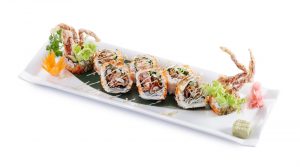 wondered what the differences were? For instance, soft shell crab, crab, and krab are all commonly seen ingredients used in many Japanese signature sushi rolls. To help you become more knowledgeable next time you order at Shōgun Japanese Steakhouse, we explain the dissimilarities of one of the tastiest crustaceans used in Japanese cuisine and its widely popular counterpart.

The Difference between Soft Shell and Hard Shell Crabs

Soft shell crabs are not a different species of crab, but in fact, begin as regular hard shell crabs. These crabs, usually blue hard shell, are referred to as soft shell due to the molting process they go through. When crabs mature and get too big for their shell, they shed their current one to make room for a bigger, new one. In order to do this, the crab uses the water to swell its body, causing its shell to bust, and then carefully climbs out. Once the crab’s shell is off, the soft inner shell is exposed until a new shell forms and hardens a few days later.

What is Krab and Why is it so Popular?

Krab, also known as imitation crab, is surimi, a whitefish such as Pollock that is mashed up into a thick paste before being colored and flavored to resemble the leg meat of either snow crab or Japanese spider crab.

Because using crab meat can be costly, Japanese manufacturers and chefs in the 1970s sought after a less expensive alternative. Krab was introduced in the United States in the early 1980s and became a hit with restaurants, who began incorporating it into their sushi dishes. Over three decades later, krab is still popular because of the benefits it offers like being easily made, readily available, cost-efficient, and having a longer shelf life than real crab.

A lot of people actually prefer eating krab over other specific kinds of seafood because it doesn’t have a “fishy” smell to it and they like the taste. Also, those who have shellfish allergies and can’t eat crabs, have the ability to eat something similar.

No matter what your preference is – crab or krab, our sushi chefs look forward to preparing you your favorite sushi, nigiri, and sashimi at the Shōgun Japanese Steakhouse, the newest dining outlet in the Rosen Inn. Enjoy the daily activities Orlando has to offer and then wind down and dig into some delightfully, tasty Japanese food.